A good head shot!! Very rare these days! Most of the time pea sees the camera come out and yells "CHEEEEEEEESE" as he's running by, so most pictures end up in a blur. Or, he turns his head right when I click. So this shot is truly a rarity! But, I admit, I had to work for it. I sat with the camera ready for quite awhile just waiting...on the hunt for a good picture. Patience pays off!
Posted by Steph at 10:09 PM 9 comments:

It was love at first sight...

three years ago today when I saw this itty, bitty sweet face for the first time.

I remember that day like it was yesterday! The long awaited call finally came. The call announcing the arrival of our son. At last! I remember trying to write down everything our adoption coordinator was telling me as my hands were shaking and tears were streaming down my face. Then, Jason and I took a deep breath and held hands as we laid eyes upon our son for the first time...in an email. Most people get to meet their child for the first time in a hospital room. They get to watch their child take that first breath and hold their bundle of joy within minutes of entering this world. We didn't have those first moments with pea, but his "birth" into our family was equally eventful and exciting. We instantly knew this was our son. No doubt about it. Of course, little did we know that this was just the beginning of an amazing journey that would change us forever and open our hearts and minds in ways we never could have imagined. It has shaped so much of how we view the world, how we parent, and our priorities in life. I wouldn't change a thing.

And, when I look at this face today, my heart still skips a beat and I sometimes wonder how I got so lucky.

Pea had a great 3rd birthday on April 11th. We celebrated with a family party at our house. In fact, it was the last party at our old house! I still can hardly believe he is three already! What happened to my baby? Well, he's still my baby, though a very big one! He had his three year wellness appointment a couple weeks ago and he is 40" tall and weighs 38lbs. This places him in the 97th percentile on US charts. It's amazing to think that he was only in the 10th percentile for the first 6 months of his life. I am afraid of what my grocery bill is going to be when he is 14!

Pea has such a loving, sweet spirit and is so full of fun and adventure. He is so inquisitive about everything and his imagination has exploded! I love watching him explore and come up with new adventures. He keeps us busy catching sharks, climbing volcanoes, fighting fires, fishing, going on train rides, and more. Who knew we could do so much in one evening?!?! What a fun, fun age (so far!).

One of pea's many obsessions is sea life. He initially wanted a Barracuda cake, but...thankfully he changed his mind to a whale. (Remember when he REALLY wanted to be a giant clam for halloween?!?!?!)

Pea and his boy cousins. They have so much fun together running wild.

Checkin' out the birthday loot.

The bubble maker was a huge hit!

And...my mom and her broken elbow. She actually broke her elbow a few days before pea's birthday. She was carrying pea and tripped on the sidewalk. They both went down hard. Pea was okay though he went through a period of shock after the chain of events (possible minor concussion) and my mom ended up in surgery the following week. She is on the mend, but it will be a slow process. Can you believe it? (Well, given that pea is already about half her size, it's really no surprise he could take her down!)

Life in a box 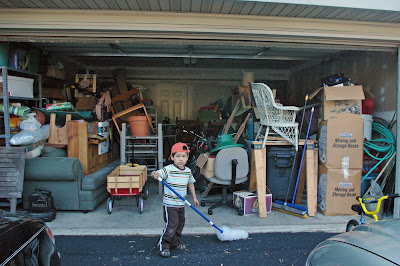 We are FINALLY done with move #1!! We are currently renting a duplex until we get possession of our new house, which will hopefully be in 6 or 7 weeks. So, everything you see in the garage is staying in the garage until move #2. We are living out of boxes and living simple right now. Hopefully move #2 will go a little smoother and a little quicker since most of our stuff is already packed. And, hopefully this will be our last move for a very loooooooong time. Pea has been amazing throughout this moving chaos! He has taken it all in stride and the transition has been virtually seamless for him. I think he is handling it much better than we are! Pea is a pretty laid back and easy going boy. I wish I could attribute these qualities to our amazing parenting skills (hehehe), but it is just his personality. He finds fun and adventure in whatever we are doing.

So now we are just going to take it easy until round 2 of the moving frenzy. We are also taking the next 6 or 7 weeks to get our adoption profile completed so we can move forward with the adoption once we are settled into our new house.

Hang in there with us! I may not be updating as often this summer, but I will do my best!
Posted by Steph at 9:42 PM 6 comments: