Up until recently, pea has been virtually fearless and he rarely shys away from anything. He approaches most new activities and experiences with lots of energy! It is so refreshing and fun to watch his fearless and enthusiastic approach to life. We all have a lot to learn from our toddlers at times, don't we? So, I was very upset when pea suddenly developed an intense fear of the water. He LOVED the water! He loved to dunk his head underwater, splash, pour water on his face before he was even a year old. That is, until he learned the hard way that water can be very scary.

Our babysitter, Diane, has an in ground pool and she takes the kids swimming one-on-one and tries to teach them some basic swimming lessons. About a month ago, she took pea out to swim and he was so excited! As is typical for him, he approached this activity full force and ran right into the water...and sank. Thank goodness Diane was right there and thank goodness she only allows one child in the pool area at a time. Of course, she informed us of what happened, but I honestly did not worry about it too much because we trust her 100% and we realize that things like this just happen. The following weekend we went swimming and pea absolutely refused to get into the water. He would not even let us hold him in the water. It was very clear that he was very, very scared. He finally ventured to the steps leading into the pool, but that is as far as he went. It was then that I realized how traumatic the pool incident was for him. On one hand, it was good that he learned how dangerous the water can be...on the other hand I was definitely upset by this new intense fear of something he loved so much.

It just so happens that we had signed him up for swimming lessons so the timing could not have been any better! But, the first lesson did not go well! He had a full body death grip on me while we were in the water and cried off and on the entire 30 minutes. I basically held him the entire time and we just walked around in the water. So, I was anticipating the same last night for his second lesson. We started off with the death grip and the crying, but he slowly started to relax. By the end of the lesson, he was laying on his belly in the water, kicking like crazy, blowing bubbles in the water, and laughing! I was so excited I almost started crying in the pool! Isn't that funny?!

Now, he definitely still had moments of fear and would wrap his arms around my neck very tightly, but he definitely had a breakthrough so I am confident he will overcome this fear very quickly. Whenever he would start getting scared, I would just have him look at me in the eyes and he would quickly calm down. For me, it was not only an experience in overcoming a new fear, but also an experience of building trust and attachment. It was confirmation that we have developed a strong attachment as a family, but also a reminder that it is something that will always be tested.

Attachment is always a hot topic in adoption so it is something I think about a lot. Sometimes it's hard to know that fine balance between what is typical toddler behavior and what is adoption/attachment related. I wonder if we sometimes become victims of adoption paranoia, thinking everything little thing must be an adoption/attachment issue. For example, pea is also going through a separation anxiety phase right now that has thrown us for a little loop because he is normally pretty easy going. My first thought was "is this an adoption/attachment issue?" even though I know it is completely normal for every toddler to experience separation anxiety at some point. In fact, it can be a very good sign of the attachment process and developmental milestones. But, I can't help but still wonder...is he afraid we are going to leave him? Is he having some sort of memories of the loss he has already experienced in his very short life? Did we leave him too long, too early when we went on our trip? I don't think so, but I still wonder.

What do you all think? Do you get caught up in the "adoption paranoia?" How do you find that balance?
Posted by Steph at 5:00 PM 7 comments:

Last weekend was our agency's annual picnic at a park just north of Indianapolis. We decided to make a long weekend out of the event and managed to cram in a lot of fun!

We left Friday afternoon and headed to Jenney & Jim's house. We received our referrals within a couple of days of each other and also went on our first visit trip together. It was so great to see them again! We had a cookout and just hung out on their deck catching up and watching our boys play together. Pea and L. had a great time together!

Here they are sharing a chair and digging into a back of chips. 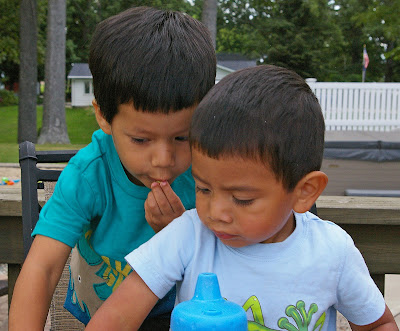 Practicing for their upcoming debut. 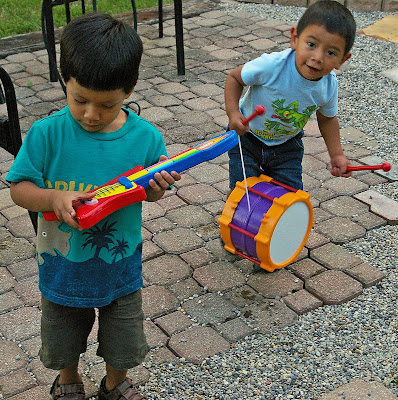 On Saturday morning, we all headed to our agency's annual picnic. There were over 900 families there. Believe it or not, I hardly took any pictures! We were very busy chasing pea around while also trying to visit with other families, especially those we have known since the beginning of our adoption process. It is always so much fun to see every one's kiddos and to be surrounded by families that look like ours! But, unfortunately, I don't have any good pictures to show how really great it is! So, here are a few token pics. 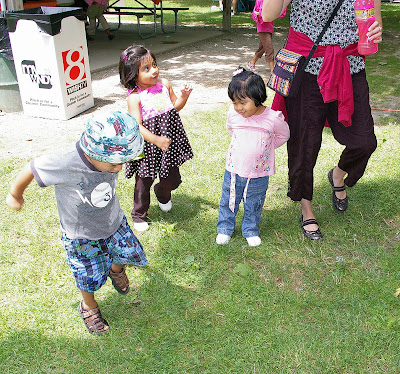 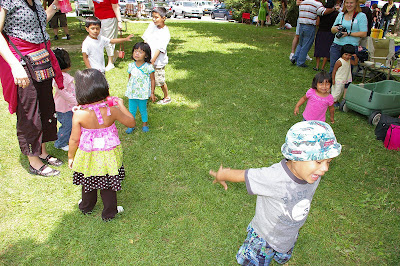 Pea was spent by the end of the picnic. It was a long, overstimulating day! I am sure he was wondering why all of these crazy strangers knew his name and why they kept trying to talk to him! Even so, we headed back to our hotel to rest up for the next activity!

Not only was our agency's picnic that weekend, but also A Gathering of Our Hearts at the Holiday Inn/Caribbean Cove water park. We missed most of the activities scheduled during the day, but we went to dinner Saturday night with, what seemed like, a gazillion people! I was a bit worried about going to the dinner, because like I said, pea was done, very done. In fact, right before dinner he had a major meltdown over a bath. I am sure the entire second floor heard him screaming! But, once he got that out of his system, he was great! I was amazed.

Our group filled up about half the restaurant and the staff were amazing! I was so impressed with how quickly they took the orders and delivered the food. It seemed like mass chaos, but they must have had a good system! And, of course we all had separate checks, too!

Here is one view of our group in the restaurant. Luckily, we brought pea's stash of cars so he and several other boys were kept entertained while we waited. In fact, he and the boy across from him thoroughly enjoyed crashing the cars together. I swear there were cars flying in every direction! 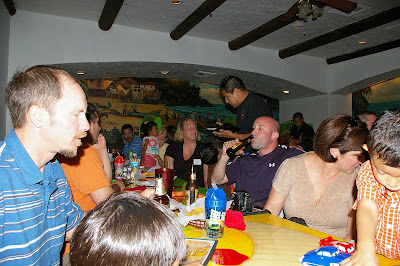 After dinner, the kiddos took over and started a dance party. It was very cute! 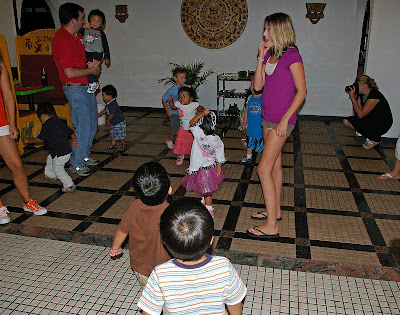 We walked back to the hotel with Nicole and Dominic. We know them through our agency and spent some time at their house last summer. Pea and Dominic were so cute on the way back. Pea would point to things with great excitement, like "look at that sign!!!" and Dominic would echo everything he said. So adorable! This is such a fun age! 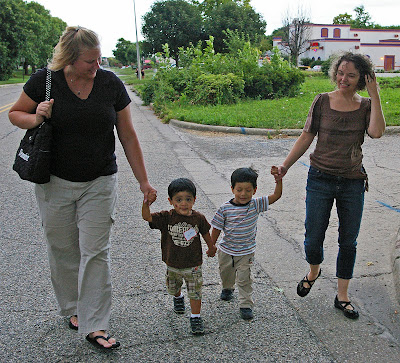 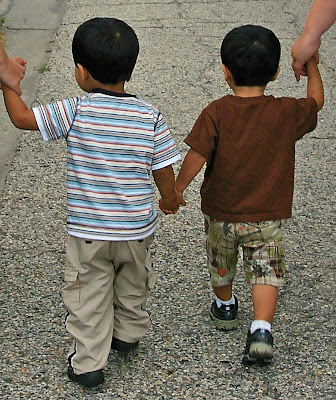 As if we had not had enough excitement, we headed to the Indianapolis Zoo the next morning. 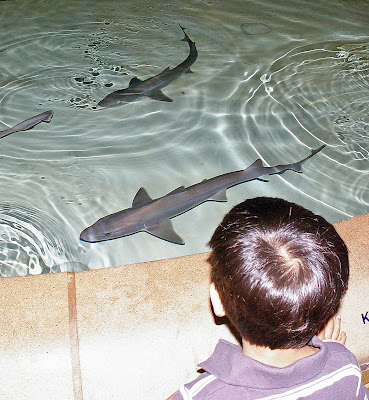 Hanging around at the zoo playground. He was a little wild man at the playground. He kept running up to random kids growling like a bear! He would spread out his legs, hold up his "bear claws," and start growling. It was pretty funny! (Hey Bobbi, this was such a Reese thing!!) 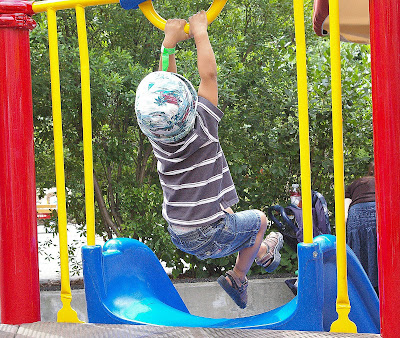 Waiting for the train ride. 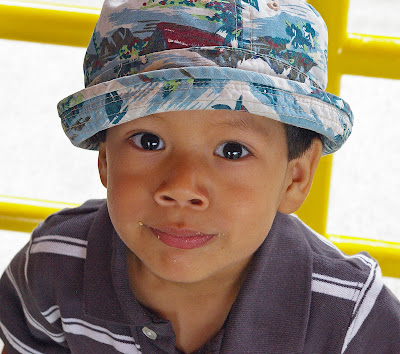 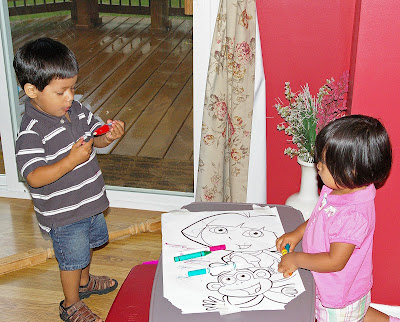 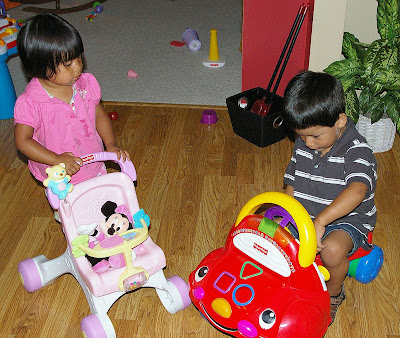 Phew! It was a busy, jam packed weekend! But, we had so much fun. We got home Monday afternoon and received a phone call from Beth informing us that everyone who was at Karen's house the night before had the stomach flu. UGH. Jason and I both woke up that night with it. Somehow, pea managed to stay healthy through it all! I am just so glad we didn't get sick in Indy!

We are already looking forward to next year's picnic weekend!
Posted by Steph at 8:33 PM 7 comments:

Zippin' through the jungle

Check one more thing off of my "before I die" list: Zip-lining!! It is something I have always wanted to do! We signed up for an all day tour through this company HERE and it was awesome! Definitely the highlight of our trip. Our guide was wonderful and we had so much fun. We not only zip-lined through the jungle, but also went bike riding through a Mayan farm, tubed in a cenote, snorkeled in another cenote, participated in a Mayan ceremony, had a DELICIOUS homemade traditional Mayan lunch, toured the Mayan Ruins of Tulum, and then swam at the beautiful beach in Tulum. All in one day! Needless to say, we were TIRED! But, it was that deeply satisfying, sense of accopmlishment kind of tired. Here are the zip-lining pics. So fun!

Flying over a cenote

Flying over a cenote

The "Tower of Death"

It was almost like climbing up a ladder to get to the top!

We had such a GREAT time!! Here is a little sneak peak into some of our adventures!

Leavin' on a jet plane

Jason and I are celebrating our 10 year wedding anniversary this year (in September) and, after much encouragement from some good friends, have decided to take a trip...without our little pea. We are heading to Mexico this Saturday for six nights to relax on the beach, snorkel, zip through the jungle, and more! We are very excited! Yet, I am also so nervous about leaving my sweet boy for 6 nights! That is a looooong time. He is staying with my parents, whom he adores! So, I know he will have tons of fun being spoiled by mawmaw and pawpaw.

Even so, it is going to be great and I will have lots of pics of our adventures to share when we return.
Posted by Steph at 10:21 PM 10 comments: