Okay, I had to add onto my last post with a few more funnies!

Goofballs. And, to think I sometimes wonder where pea gets his silliness! Lord help me...

Between pea and Jason, there is always some sort of craziness going on at our house and Jason always knows how to make pea laugh. You know...that pure, laughing-so-hard-stop-I-can't-breathe kind of laugh. It is music to my ears and always gets me laughing, too!

Pea doesn't always need his daddy to get laughing. He is learning to crack himself up and, I admit, he is pretty funny! Sometimes he really tries to be funny and, well, most times he is funny just by nature of being a toddler. For example:
I love hearing toddler funnies! What have your little ones done? Leave a comment or write your own post!
Posted by Steph at 9:48 PM 5 comments:

and say hello to little fish! Yes, my little fish is baaaaack!! Woohoo!! No more screaming with terror in the water!! Pea had his last swimming lesson Tuesday (for this session) and did awesome! He was so ready to be off swimming by himself and I could barely hold onto him. He swam on his back and on his stomach and could not get enough dunking under water. Just when he thought it could not get anymore exciting, they pulled out the slide. He was so excited, I had to hold him back until it was his turn. All of the other kiddos slowly or moderately slid their way down the slide and ever so gently into the waiting arms of their parents. Not my pea...I swear the slide was greased when he went down! He sank right to the bottom and popped up wanting more. He went down a few more times and just could not get enough. What a difference a couple weeks makes! He not only loved sliding into the water, but also loved climbing out of the pool (which he did all by himself) and jumping off the side. It was so fun! To top if off, he had already spent 1.5 hours swimming earlier that day at the babysitter's house. And, he didn't want to get out then! I am so happy and relieved that he got over this fear of water so quickly. We are signing him up for lessons again this fall and I am sure he will be swimming without any help in no time.

Getting ready to jump off the wall. I really had to remind him to wait until we counted to 3 before jumping in. 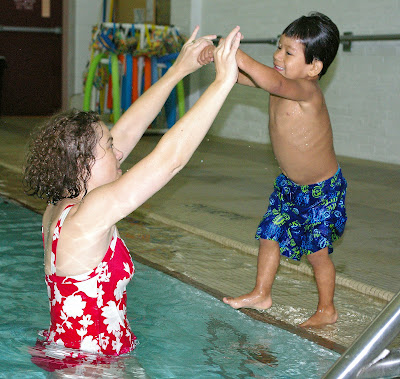 Speaking of water, our underwater pictures from Mexico turned out terribly! We are so disappointed! So, I will have to post some other pictures soon.
Posted by Steph at 9:02 PM 5 comments:

Livin' it up on the cheap

Quick, easy, delicious, healthy, and cheap! The perfect meal combo! I have not only been challenging myself to cut our grocery bill in half, but also to have meals that are quick and healthy. My sister and I went to the Aunt Millie's bakery outlet and found some great deals on whole grain breads (some even organic!) for $0.49, including a package of whole wheat pitas. No, they were not expired or even close to being expired...just overstock. So, I decided to make some pita pizzas today based on a recipe I found online.

Remember the garden fresh pesto in my freezer? Well, I used this as the base. I deviated from the recipe (of course!) and used some chard we bought at the farmers market, some summer squash from our garden, and a tomato from our garden. I topped the pizzas with a little bit of feta and other shredded cheese. I chopped the veggies up pretty small so that pea would not have the opportunity to pick them off! He gobbled it up. Yet, another easy and delicious way to sneak in a variety of veggies. 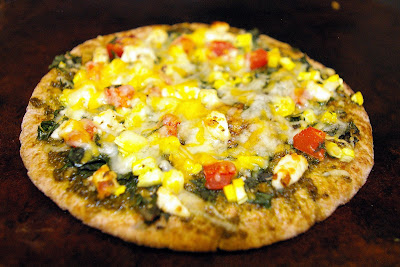 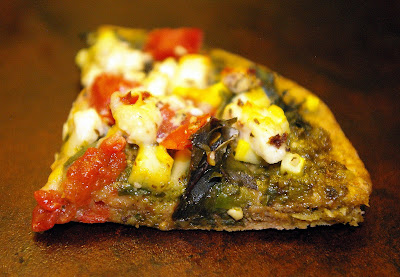 I then pulled out the red potato wedges I froze last weekend and made some oven baked fries. I simply tossed the fries with a little olive oil, lots of minced garlic, italian seasoning, salt, and a little bit of balsamic vinegar then baked them at 400 degrees (425 may have been better) for about 20 minutes turning once. They were so good!! 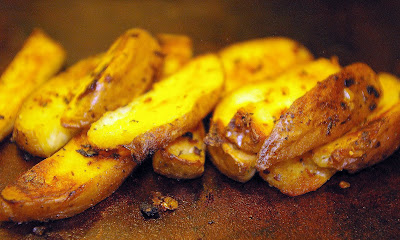 This dinner was so easy, quick, and really yummy! Not to mention...pretty healthy. Okay, I know it's a little carb heavy, but hey...it's good! Here is the recipe I used to create pizzas: PITA PIZZA.

It was also very cheap. Here is the approximate rundown based on the amounts I used for this recipe:

Let me know if you try any of these recipes and if you add your own version! I love to hear other ideas for adjusting recipes.
Posted by Steph at 9:22 PM 7 comments:

Our pea has some big feet and they keep growing!! I did a similar post last year after he went from a size 4 to a size 6 within a few short months. Well, this summer he managed to go from a size 7 to a size 9 in less than one month. No joke!!! About 3 weeks ago, he started wearing size 8 and now he is in size 9. Sheez! He is growing way to fast and I don't like it! He is up to 37" tall (as of 3 weeks ago) and weighs 33lbs (he actually lost a couple pounds in the last month or so!). For the first 5 or 6 months of his life he hovered in the 5-10th percentile and is now consistently in the 90-95th percentile. He is a big boy!

He received these size 7 firetruck shoes for his birthday in April. I LOVE these shoes and I am so sad they are now too small! 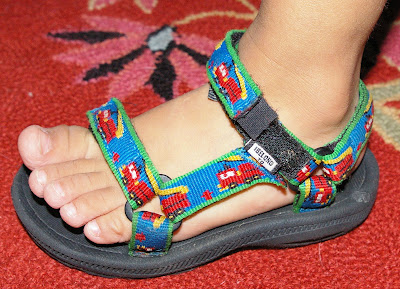 His size 8 shoes that he not only outgrew in 3 weeks, but he also destroyed by dragging his feet down the sidewalk when riding his ride-on horse. 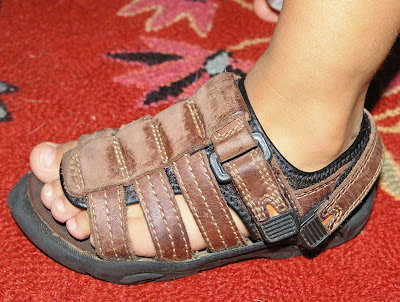 His newest pair of sandals...size 9. It doesn't look like these are going to fit for very long, does it? At least they only cost $3.00!! Gotta love Once Upon A Child (they were brand new Children's Place shoes with the tags still on!). 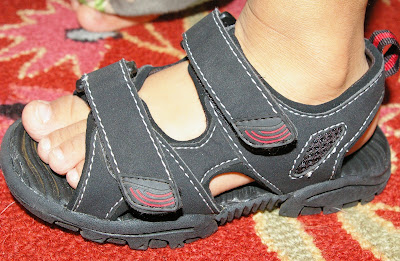 Aside from growing like a weed, here are a few other tidbits about pea:
I finally took our underwater cameras to be developed so I hope to be posting some more Mexico pictures soon!
Posted by Steph at 2:10 PM 7 comments:

Here is the recipe for Black Bean Casserole that I mentioned in my previous post. As I have stated before, I do not follow recipes exactly and this one is no exception. In fact, I don't have this recipe written down anywhere, it is just one of those in my head so it changes all the time! But, here is the basic premise:

1lb ground turkey or ground beef (you could also use chicken and I often don't use any meat at all)
1c. bell pepper, chopped
1c. onion, chopped
2 cans black beans
1 can corn (sometimes I use corn, sometimes not)
1 can chopped tomatoes with green chiles
Various spices to your taste: cumin, chili powder, garlic, oregano or whatever else you like. You could substitute a package of taco seasoning, too.
cheese (your choice: cheddar, pepper jack, mexican blend)
12 corn tortillas

Preheat oven to 350. Brown turkey with onions and peppers. Add seasoning. Add black beans and tomatoes. Simmer until heated through. 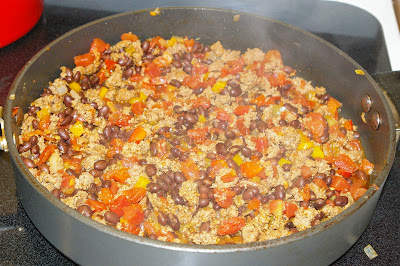 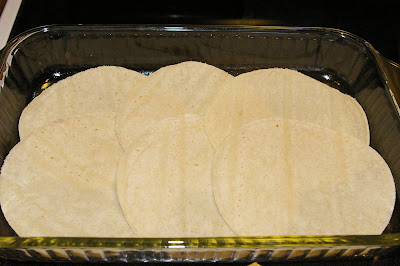 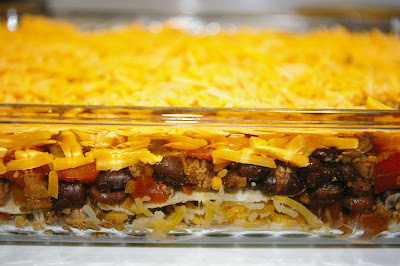 Bake for 20-30 minutes. If you are baking it right away, then stick with around 20 minutes or so since you are primarily just melting the cheese. I had it in the fridge all afternoon so I baked it for 30 minutes, which was perfect. 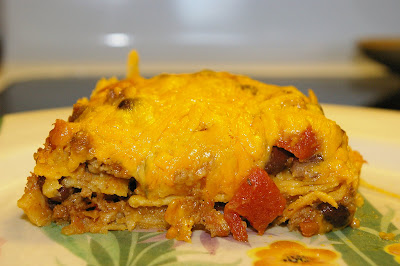 Enjoy! Pea thoroughly enjoyed this tonight. After each bite, he either said "yum, yum" or simply "mmmmmm." It was soooo cute and funny!
Posted by Steph at 9:44 PM 7 comments:

A day in the kitchen

Remember my post a few weeks ago about my couponing/bargain shopping adventures? Well, it has become a bit of an obsession for me lately and, man, am I scoring BIG on groceries and other personal items! It definitely takes me more time to plan my shopping trips, but I am getting more and more efficient with organizing my coupons and finding the best deals. As an example, I went to Meijer this week and spent $27 on groceries, but saved $57! Woohoo! I was able to get several items for free between coupons and sales. I hate wasting money when I know I can get an item cheaper or free! Especially when it means we then have more money available for other things that are important to us. 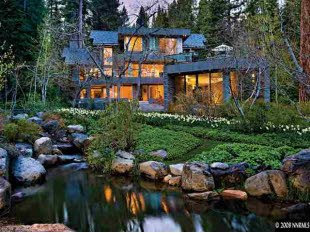 We have always wanted to get a pop-up camper, but there was always something else taking priority. So, we have decided to set it as a goal to save for right now and hopefully we can get one sooner than later! We also want to buy a bigger house. Okay, not quite as big as the one in the picture, but...it sure is beautiful, isn't it?!?! I don't think I have mentioned that we decided to hold off on putting our house on the market this year (mainly due to the economy), but we plan to try selling our house in the spring. Since we know we will not be able to sell our house for as much as we'd like, we need to start saving now so we will be ready to purchase another house when that time comes.

Why am I telling you this? Well, this post is primarily a public reminder to myself that all the time and effort I put into cutting our spending will pay off when we are creating family memories by the campfire and finding a new home for our family to grow. And, sometimes making personal goals public adds even more motivation!

So, today I had a little impromptu stocking up day in the kitchen to make it easier later on to whip up dinner and reduce any excuses to eat out when we are feeling lazy! I started around 11:15am and worked for about 2.5 hours total throughout the afternoon (with a few breaks here and there so not to bad!) I found a great deal on potatoes this week so I cooked some in cubes and some in wedges for french fries. I then froze them with my vacuum sealer (LOVE IT!) so we can just pull them out of the freezer and throw them in the oven or microwave. I then browned 2lbs of ground turkey with red peppers that can be quickly thawed for tacos, pasta, or whatever! In the meantime, the crockpot was busy cooking up pulled pork that is now in the freezer and ready for fajitas, sandwiches, quesadillas, etc. Since I was already browning the ground turkey I decided make one of our favorite recipes: Black Bean Casserole. YUM! I actually got this recipe from my mother-in-law. I make it different every time, which is the beauty of this recipe! Plus, it is soooo easy. I will share the recipe in a separate post since this one is getting long.

After his nap, pea decided to "help" me out with baking a few loaves of Blueberry Banana Bread. 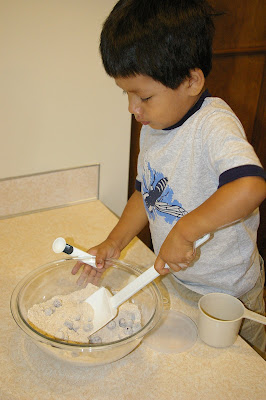 His idea of helping was flinging flour around, shaking the vanilla, dumping cinnamon on the table...but he loves to help! 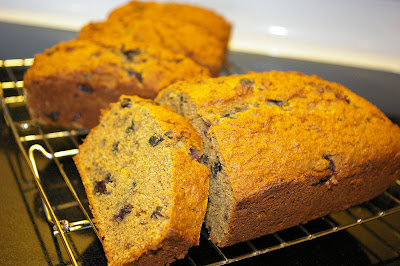 All in all, it was a pretty productive afternoon. I hope to have one of these freezer stock-up days about once a month. But, I noticed that we have ton of basil ready in the garden so I will need to make some of my pesto stock very soon and we are starting to be bombarded with summer squash. So, I may have another stock-up day sooner than later!
Posted by Steph at 8:44 PM 1 comment: