Life has felt a little crazy the last few weeks! I have good intentions to post more often, but...Throughout the day I have these brief moments of inspiration for post ideas, but by the time I get home...POOF, it's gone!

I went back to work about 3 weeks ago and the transition has actually gone much smoother than I anticipated. I believe that having 6 months home with Little Pea made a world of difference. I can't imagine how much more difficult it would have been if I had returned to work after the typical 12 weeks! So, with that in mind, I feel very lucky!

Dropoffs at the babysitter's were pretty rough for about the first two weeks. She literally had to peel Eli off of me as he screamed and wailed holding his arms out to me. UGH. That was awful!When I would pick him up after work, he would run to me crying and just lay his head on my shoulder while I received the daily update. But, alas, for the past week, Eli is running to the toy room before I'm even out the door. Sigh...I suppose that is a good thing! But, I LOVE seeing him run to mama at the end of the day with a huge smile and open arms! He seems to really love being with the other kids, especially one older boy. Eli just adores him. He also seems to have a little arch rival. His first week, he scratched this little girl on the face with a toy and the next week she sought revenge. He looked like he had been attacked by a cat. Terrible scratches ALL over his face. It was quite shocking. Thank goodness it has healed quickly, though Eli has kept his distance from this little girl! Smart boy.

Overall, we're still settling in to our new routine. It makes our evenings and weekends feel even that much more precious. Eli is talking more and more. The other day he surprised us by saying "penguin" when looking at his animal book and today at the grocery store he asked for a "cracker." He also loves to introduce his "da" and "mama" to other people. It's very cute! In addition, he has figured out that his highchair can also be used as a ladder to access higher places. Yea, he pushed his ladder over to the counter, turned on the toaster oven and then opened it. This boy has no fear. Here are a few pics from the last week.

Eli decided one apple was not enough so he also took mine! 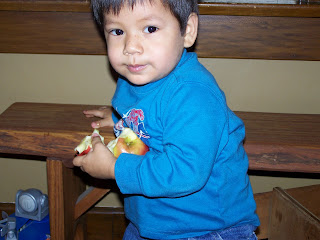 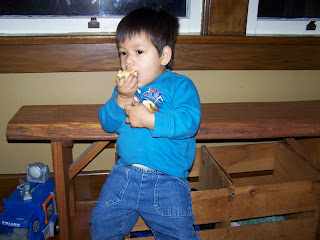 Enjoying one of our last nice days! We had our first snow on Saturday. YUCK! Not ready for cold! 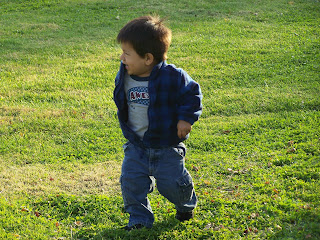 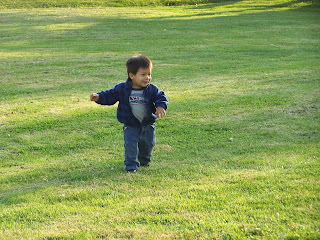 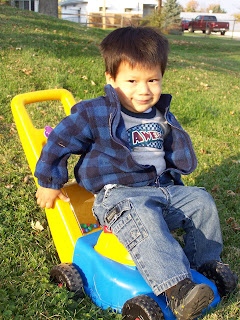 What a sweet little pea you have there! I'm glad you're all settling into the new routine. I know all too well how difficult it can be. It takes time, but eventually it will be the normal grind just like the old days (but more fun)! Enjoy every moment!

He just gets more and more handsome.
Glad that things are going well in your new routine and he is adjusting well.
I told you what I thought of the little girl......don't pick on him!!!

Yay! A very good update! I've been a negligent blogger, too - but it's unacceptable for others! haha!

Hate the peeling! Love the reunions! Sad when I just get the "Oh hey Mom - I'm not ready to leave yet." ;-(

Glad all is going well...snow? snow? I betta get SNOW this year!

Love Eli! Could he be any cuter!?!

The whole work thing keeps getting better....you will settle into a routine. I agree....the greeting after a long day is the BEST!!

I haven't been too great at blogging either, life just gets in the way ya know? :) So glad things are going well with you back at work. Eli is so cute! I was sorry to read about your grandma. It's so hard losing a loved one but I am glad she is no longer suffering.